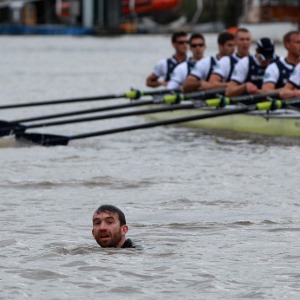 Earlier this week, Trenton Oldfield http://www.bbc.co.uk/news/uk-england-19733385 was convicted of ‘Causing a Public Nuisance’ by a jury at the Isleworth Crown Court. Previous instances of this rarely prosecuted offence include impregnating the air with “noisome and offensive stinks and smells” causing “a nuisance to all the King’s liege subjects living in Twickenham” But Oldfield was the man who had the temerity to disrupt the Oxford and Cambridge Boat Race last April, by choosing to take a swim, just as both boats were getting into their stride.
The prosecutor explained to the court that his actions had “spoiled the race for hundreds of thousands of spectators” and for this, the judge has adjourned sentence,commenting that she is not ruling out a prison sentence.
Of course, Mr Oldfield is not the first person to attempt to make a point by spoiling the fun of sports enthusiasts. Famously protestors dug up the crease at the 1975 Third Test between England and Australia in an attempt to bring to the publics attention that an innocent man had beensent to prison for robbery the year before. Only last year, that man, George Davis  http://en.wikipedia.org/wiki/George_Davis_(robber) was exonerated by the Court of Appeal and his conviction held to be unsafe. One of the men who vandalised the cricket field, Peter Chappell, http://www.wrp.org.uk/news/6398  was sent to gaol for his part in trying to raise public awareness in what has since been recognised as a gross miscarriage of justice. No doubt the Third Test, back in that rainy Summer of 1975 was “spoiled for hundreds of thousands of spectators”, but, nearly 40 years later, their sporting pleasure was nothing compared to the gaoling of an innocent man.
Similarly the thrill of horseracing was spoiled for many spectators when a suffragette http://www.bbc.co.uk/history/historic_figures/davison_emily.shtml threw herself under the King’s Horse and was trampled to death, but surely the spoiling of their fun was nothing compared to the denegration of women in that pre-vote era. Her tragic death, as she ran into the path of the galloping horse was borne of anger and frustration in an age since recognised as discriminatory and unfair.
Interestingly, one of the reasons why Oldfield swam out amongst the boats was that he objected to the government and Olympic organisers call for us to report anyone we suspected of planning a public protest during the Olympic period http://www.guardian.co.uk/uk/undercover-with-paul-lewis-and-rob-evans/2012/jul/24/police-need-intelligence-over-olympics-protests. For this he was charged with ‘Causing a Public Nuisance’. The ingredients of the offence are that he behaved in such a way that an injury was suffered by the public and potentially carries a life sentence http://www.cps.gov.uk/legal/s_to_u/sentencing_manual/public_nuisance/. Of course, Mr Oldfield will not get life, but this rarely prosecuted offence may yet see him serving time.
In fact what Trenton Oldfield did during the last Boat Race was in the finest historic traditions of getting public attention at a big sporting event, for a cause which struggled to attract National interest, sympathy or appreciation. He has been treated in the same way as others before him, ridiculed and criminalised. The usual suggestions that a sporting venue is, in any event, no place for such behaviour has also, predictably reared its head and, again  predictably, venerated sports people have castegated the behaviour of the protestor.
We live in a Society which only tolerates public protest so long as it is clean, relatively quiet and does not inconvenience anyone. The moment it threatens or spoils our fun it becomes a police matter.
Ultimately, history treats the protestor far more equitably than the present.

There are few things more sensitive than sexual offences and how we
deal with sex offenders.

In the calendar of criminal offences, there can be nothing more
appalling than the sexual violation of any individual and the whole
issue, quite understandably triggers painful and volatile debate. Most
importantly, the victims of sexual offences are caused anxiety and
distress whenever the subject of sex offenders becomes a topic of
public debate and unless the issue is discussed accurately and
responsibly, there is the real risk that victims will be deterred from
reporting crimes to the police.

So it is that Ministers, Commentators and interest groups, including
the NSPCC http://www.nspcc.org.uk/, waded into this highly sensitive
area when the ruling in R (on the application of F by his litigation
friend F) and Thompson (FC) (Respondents) v Secretary of State for the
Home Department (Appellant) [2009] EWCA  Civ 792
http://www.supremecourt.gov.uk/decided-cases/docs/UKSC_2009_0144_Judgment.pdf
came into force a few days ago.

It does none of these groups any credit to analyse for a moment the
ill-judged, knee-jerk reactions which flooded onto the media. The
misinformation and at times downright hysteria coming from the mouths
of people who should know better was shocking. Furthermore, there can
be no excuse for it. I think that we can safely assume that Ministers
and Charities such as the NSPCC have legal advice and that the impact
of ‘F’ upon the way sex offenders are monitored in England and Wales,
was recognised as being marginal and certainly not worthy of the
hyperbole of the last few days.

Lets put a few myths right. Sex offenders still have to register as a
matter of compulsion. Sex offenders still remain on the list for life,
as they have always done and do not automatically come off it after 15
years. Sex offenders will have to convince a Police Force that they
are safe to come off the Register after 15 years of being on it in the
community and one can assume, having not been convicted of further
offences.

Listening to the rhetoric of Ministers and in particular Theresa May,
the Home Secretary over the last few days, it is not surprising that
vulnerable people, victims and those under threat, were shaken by what
they were hearing.

The problem is, that when it comes to sexual offending, politicians
have been brought up to take no chances… look what happened to Ken
Clarke for instance. Best deal with it in broad strokes so that there
can be absolutely no room for misunderstandings, or worse, the media
deliberately making it a crisis.

For a moment, for those who want a calm consideration of the
situation, let’s get to the facts.

By way of background to the legal foundations for the present
position, we need to go back to the Sex Offenders Act 1997
http://www.legislation.gov.uk/ukpga/1997/51/contents  and in
particular, Section 1(3)
http://www.legislation.gov.uk/ukpga/1997/51/pdfs/ukpga_19970051_en.pdf
. This laid down that there would be an automatic statutory
notification upon conviction of the name, address and date of birth of
the offender within 14 days of the conviction. This was to be given to
the police and that they should further give notification of any
address at which they would be staying for 14 days or longer.

Then came the Criminal Justice and Courts Services Act 2000
http://www.legislation.gov.uk/ukpga/2000/43/contents which reduced
notification time to 3 days and introduced a requirement that if the
offender went overseas, they should give notification within 48 hours
of travel to include details of the carrier, points of arrival, where
they were staying, date of return and point of arrival.

Both pieces of legislation were repealed and substituted by the Sex
Offenders Act 2003
http://www.legislation.gov.uk/ukpga/2003/42/contents  Section 82
onwards http://www.legislation.gov.uk/ukdsi/2012/9780111521403.
Take a look at this provision. It strengthens the already stringent
regime of the previous legislation and quite properly restricts any
movement and activity of convicted sex offenders comprehensively. I
make this point and lay out the historical development of these three
protective statutes, because listening to Ministers over the last week
or so, you could be forgiven for thinking that it has all been swept
away. It has not.

Victims of sex offences and those who may be on the edge of reporting
sex offences should know that the law provides for extensive
restrictions upon those convicted. Ministers do irreparable damage to
the criminal justice system when they imply otherwise.

A close reading of ‘F’ also makes it clear that the Supreme Court were
bolstering this protective series of provisions. Lord Phillips
confirmed in terms that it is lawful to monitor for life sex offenders
and everything that their Lordships said, marked and reiterated the
heinous status of sexual offending in the eyes of the law.

The case was not about whether sex offenders should or could be
monitored for life, it was a case decided upon the very narrow issue
of whether 15 years after release, some could apply for a review, as
to whether they might be removed from the Register.

As a matter of law, and quite rightly in my view, the Supreme Court
decided that being put on the Register for life, without the chance of
review was disproportionate when taking into account the provisions of
Article 8 of the European Convention on Human Rights http://www.yourrights.org.uk/yourrights/the-human-rights-act/the-convention-rights/article-8-right-to-respect-for-private-and-family-life.html.

Proportionality was considered with reference to the leading authority
of De Freitas v Permanent Secretary of Ministry of Agriculture,
Fisheries, Lands and Housing [1999] 1 AC 69 [at page 80]
http://www.bailii.org/uk/cases/UKPC/1998/30.html , in that the
requirement in question should be no more necessary than to accomplish
the objective.

The objective is to keep Society safe. There was considerable
consideration in the case of whether sex offenders can ever be safely
let back into the community without close monitoring and this debate
continues outside of the Supreme Court. Perhaps reassurance can be
gained from official statistics for 2008 which suggest that
reoffending rates for sex offenders at 26.8% is lower than domestic
burglary [59.9%], and Robbery [38.1%
http://www.justice.gov.uk/statistics/reoffending/proven-re-offending].

As such, the Supreme Court ruled that no chance of review was disproportionate.

That is the reality. Of course some will say that there should never
be an opportunity of review, they would probably be the same people
who argue with passion that ‘the keys should be thrown away’. But
whether we like it or not, the ultimate protection for Society is
rehabilitation and sometimes, just sometimes, the odd sex offender
might persuade a policeman that that is possible. That is the top and
bottom of it and it seems to me that this debate is more a product of
the political conference season than responsible public reassurance.